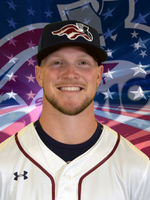 Biography:
Teasley enters his third year with the Somerset Patriots and third season in the Atlantic League. The southpaw enjoyed another strong year with Somerset in 2018, posting four wins with a 3.60 ERA and 71 strikeouts over 16 games (15 starts). Despite missing over a month due to injury, Teasley returned strong to finish the season, including a six-strikeout performance over five innings of one-run ball in a Game Four of the Liberty Division Championship Series win over the Long Island Ducks.
The Port St. Lucie, Florida native had a breakout 2017 season in Somerset, posting a 7-2 record with a 2.85 ERA over 14 appearances (10 starts). Teasley went 2-0 and allowed just one run over his first four appearances (0.75 ERA) as a reliever before he transitioned into the starting rotation.
From there, Teasley shined. He went 5-2 over 10 games as a starting pitcher and was selected as the starting pitcher for the Liberty Division in the 2017 Atlantic League All-Star Game. He tossed a scoreless, perfect inning to begin the festivities at TD Bank Ballpark.
At the time of the All-Star Game, the lefty was tied for the league-lead in wins (7) and ranked sixth in the league in ERA (2.85). His contract was later purchased by ChinaTrust Brothers (Taiwan) on July 17th, where he finished his 2017 season.
Teasley owns an 11-7 record with a 3.18 ERA, 120 strikeouts and 28 walks in 161.2 innings pitched over his two seasons with the Patriots.
Prior to 2017, Teasley had pitched for three seasons with the Southern Illinois Miners of the Frontier League, totaling a 28-14 record with a 3.67 ERA in 57 starts. He went 8-5 over 17 starts and finished third in the league in complete games (three) with the Miners in 2016.
The St. Leo College alumnus impressed in 2015 with Southern Illinois as well with a 9-4 record over 20 starts with a 2.78 ERA. Additionally, he finished third in the league in innings pitched (126.1) and fourth in strikeouts (105) that season.
Teasley also led the Frontier League in wins (11) in 2014. In his three seasons with the Miners, he became the franchise’s all-time leader in starts, innings pitched and shutouts. He also tossed the first no-hitter in team history on June 5th, 2014.
The 26 year-old began his career in the Tampa Bay Rays organization, where he tossed a 2.61 ERA over 41.1 innings of work split between Rookie-level Princeton and Short-Season Hudson Valley.
He owns a career 42-25 record and a 3.47 ERA over six seasons of professional baseball stateside.