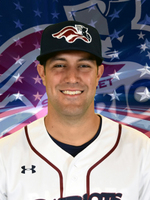 Biography:
Rodriguez enters his third season with the Somerset Patriots and third in the Atlantic League. The everyday shortstop enjoyed a breakout 2018 season that saw him achieve a number of accolades, including both Mid-Season and Post-Season All-Star honors, the All-Star Game MVP award and the Patriots’ team MVP award.
As for stats, Rodriguez led the Patriots in games played (122), at-bats (432), hits (131), runs (69), and RBI (55). His .303 batting average ranked second on the team and 10th in the Atlantic League, while his .395 on-base percentage was also second on the team and fourth in the league. He set a career-high with five home runs: fourth most on the team.
The Oak Hill, Virginia native led all Atlantic League shortstops in batting, on-base percentage, games, runs, doubles, and walks (58). He also ranked second amongst shortstops in at-bats, hits, RBI and stolen bases (17). Defensively, Rodriguez played in more innings (1,034.2) and recorded more put-outs (190), assists (309), and double plays (76) than any other shortstop in the league.
Rodriguez also shined on the league’s biggest stage, going 3-for-3 from the plate in the Atlantic League All-Star Game. He reached base four times and recorded two RBI – including the game-tying and walk-off game-winning runs – en route to being named the game’s MVP.
At the end of the regular season, Somerset Patriots fans voted Rodriguez as the team MVP. His impressive season carried over to the Atlantic League playoffs, where he went 7-for-16 from the plate, good for a team-best .438 batting average. He also scored a pair of runs, drew a team-high five walks and finished with a .591 on-base percentage over five games.
The University of Maryland Alum also excelled in 2017 with the Patriots. He led the team in doubles (20), ranked second in games played (112), at-bats (405), hits (104) and finished third in runs (57) and walks (50) that season. Additionally, Rodriguez hit .412 (7-for-17) with three runs scored in the 2017 playoffs.
He was originally drafted in the 17th round of the 2012 draft by the Milwaukee Brewers. He spent the first three years of his career in the Brewers organization, including a season with High-A Brevard County in 2014. Rodriguez then spent his next two seasons with the Joliet Slammers (Frontier League), where he never missed a game, leading the league in games played both years.