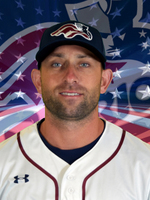 Biography:
Below enters his third season with the Somerset Patriots and third in the Atlantic League. The 6’3” southpaw went 9-6 with a 3.98 ERA over 22 starts in Somerset last year. He led the team in starts, wins, and innings pitched (128.2), while finishing second in strikeouts (94) during the regular season. Additionally, Below yielded just 22 walks on the season – fourth fewest in the Atlantic League among qualified pitchers. He walked more than one batter in only four of his 22 starts.
The Britton, Michigan native went 5-1 with a 2.88 ERA over 62.1 innings pitched as a reliever in his first season with the Patriots. His 46 relief appearances ranked third on the Patriots in 2017, while his ERA led the team among pitchers with at least 25 appearances. Additionally, Below struck out 58 batters against just nine walks.
Below has twice been named an Atlantic League All-Star. He carried a 2.21 first-half ERA in 2017 towards a selection to the Mid-Summer Classic in Somerset, while parlaying his 3.20 first-half ERA last year into a nod for the All-Star Game on Long Island. He has tossed two scoreless innings across his two All-Star Game appearances.
The Lake Michigan College alumnus owns a 14-7 record with a 3.65 ERA over 68 appearances (22 starts) in his two seasons with the Patriots.
The 13-year pro appeared in 43 games (three starts) in the Majors spread across three seasons (2011-13) with the Detroit Tigers and Miami Marlins. Below’s best season in the majors came in 2012 with the Tigers in which he went 2-1 with a 3.88 ERA and 29 strikeouts against just eight walks in 27 appearances (one start).
Below spent 2015 and 2016 with Triple-A Las Vegas in the New York Mets organization after spending eight of the first nine years of his career in the Tigers organization. He recorded nine wins with Las Vegas in 35 appearances (28 starts) over those two years, including a 2.19 ERA over 49.1 innings of work in 2015.