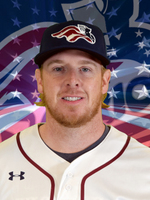 Biography:
Antonini enters his third season with the Somerset Patriots and fifth in the Atlantic League. The southpaw reliever impressed with a 1.61 ERA over nine starts with the Patriots in 2017, but built upon those numbers out of the bullpen in 2018. He went 3-2 with a 1.41 ERA over 42 relief appearances, including a 56/11 strikeout-to-walk (K/BB) ratio over 51 innings of work.
The Aston, Pennsylvania native led the Atlantic League with a 0.76 WHIP (minimum of 40 innings pitched). Additionally, only Felipe Paulino (Sugar Land Skeeters) had a lower ERA (1.18) than Antonini in the entire league among pitchers with a minimum of 50 innings of work.
Antonini did not allow an earned run over his first 10 appearances, stretching 14.2 innings of work from April 27th to May 31st. He allowed just three hits over this stretch. The second-year Patriots lefty picked up his play again after June 14th. He allowed just four runs and four walks while striking out 32 batters with a 1.15 ERA over his final 27 appearances of the regular season. That included 14-straight shutout relief appearances from July 8th to August 18th.
His success continued in the postseason, where he made three scoreless and hitless relief appearances in consecutive games, striking out six batters against one walk over 3.1 innings of work.
Antonini went 2-1 with a 1.62 ERA over nine starts in his first go-around in Somerset back in 2017. The lefty struck out 47 batters against just 10 walks over his 39 innings pitched that year, including a career-best 10.8 K/9 ratio.
He did not allow more than two runs or five hits in any of his nine regular season starts in 2017, including a 10-strikeout performance over five shutout, one-hit innings on August 13th against the Lancaster Barnstormers. His lone loss – which came in his next start on August 19th at Southern Maryland – occurred after he tossed six innings of a seven-inning game without allowing a hit.
Antonini appeared in 13 games with the Camden Riversharks in 2013 before he pitched for the Bridgeport Bluefish in 2015 and 2016. His previous best Atlantic League season came in 2015 with the Bluefish when he posted four wins over 11 starts with a 2.79 ERA and 62 strikeouts in 67.2 innings of work.
The Georgia College and State University alumnus also enjoyed a solid season for the New Jersey Jackals (Can-Am) in 2014 with a 9-3 record, 2.84 ERA and 115 strikeouts in 117.1 innings pitched. That included a Can-Am record 15-strikeout performance on July 12th, 2014 against the Lincoln Saltdogs.
Antonini spent the first four years of his professional career in the New York Mets organization, and reached the Triple-A level in both 2009 and 2010. He was then traded to the Los Angeles Dodgers and was named a 2011 MiLB.com Organizational All-Star with Double-A Chattanooga. He appeared in 30 games with Triple-A Albuquerque in 2012 and was twice called up to the Majors, but never appeared in a game.
The 2007 18th-round draft pick is 62-65 in his 11-year professional career with a 4.00 ERA.