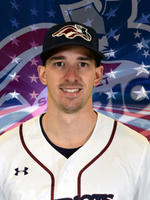 Biography:
Fransoso enters his second season with the Somerset Patriots and second in the Atlantic League. The utilityman slashed .267 with two home runs, 46 RBI and 24 stolen bases over 120 games in his first campaign with Somerset last year. He finished the season seventh in the league in walks (62), tied for seventh in games, 10th in steals and 13th in on-base percentage (.371). Fransoso also led the Patriots in walks and triples (6), ranked second in games, at-bats (393) and runs (61) while finishing third in hits (105).
The Portsmouth, New Hampshire native got off to a blistering start to begin his Somerset tenure. Fransoso led the league in on-base percentage (.495) and ranked second in the league in batting (.383) through the Patriots’ first 30 games of the season. He finished the first half third in the league in OBP (.413) and sixth in average (.312). “Soso” was promptly selected to the Atlantic League All-Star Game, where he went 2-for-4 with a run scored and a RBI.
Fransoso’s biggest contributions to the team were possibly his defense and his versatility. A natural middle infielder, the UMaine product made starts at every position in the field for the Patriots aside from catcher and right field. The majority of his playing time came in the outfield, split between left field (33 starts) and center field (30 starts), but he also made appearances at first base (three starts), second base (26 starts), third base (19 starts) and shortstop (three starts).
The former Pittsburgh Pirates draft pick spent the two seasons prior to Somerset with the Rockland Boulders (Can-Am League). There, he finished second on the team in batting in 2016 with a .291 average along with six home runs, 43 RBI and a .395 on-base percentage (OBP) over 86 games. Fransoso then followed up with a strong 2017 campaign in which he hit .272 with four home runs, 38 RBI and a career-high .406 OBP.
Fransoso also ranked among league leaders in steals over the last two seasons. He finished 2016 with 21 stolen bases – eighth-most in the Can-Am League – and a career-high 30 stolen bases in 2017: third-most in the league. He hit .282 with 10 home runs, 81 RBI, 51 stolen bases and a .400 OBP over 174 games in his two seasons in Rockland.
The 28 year-old spent the first three years of his professional career in the Pirates organization, splitting time between Low-A Jamestown, Single-A West Virginia and High-A Bradenton.
Fransoso has played every position defensively aside from catcher and owns a .264 batting average with 21 home runs, 194 RBI and 104 stolen bases over his six-year professional career.