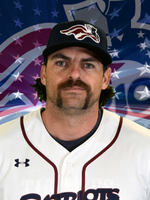 Biography:
Zinicola enters his second season with the Somerset Patriots and fourth season in the Atlantic League. He previously spent two seasons with the Sugar Land Skeeters (2016-’17) and the early parts of 2018 with the Road Warriors before signing with Somerset on August 10th. The righty shined after that point, posting a 1-2 record with a 2.87 ERA over his final 12 games of the season. Additionally, he only allowed an earned run in two of his 12 relief appearances and carried a 0.61 ERA aside from one outlier performance in late August.
Zinicola appeared in 19 games with the Road Warriors to begin his 2018 season. He had combined to appear in 70 games with the Skeeters spread across his previous two seasons, including a 2.93 ERA over 61.1 innings of work in his 2016 campaign.
Zinicola was drafted in the sixth round of the 2006 MLB Amateur Draft by the Washington Nationals organization, where he spent seven seasons to start his professional career.
”Z” has eight seasons of minor league service, including four seasons at the Triple-A level. In addition to time with the Nationals organization, Zinicola spent one season with Double-A Bowie in the Baltimore Orioles.
For his career, Zinicola has a 3.78 ERA, 80 saves, and 523 strikeouts over 616.1 innings pitched in 502 games (seven starts).