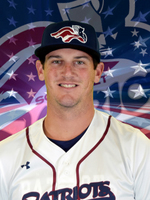 Biography:
Ohlman enters his first season with the Somerset Patriots and first in the Atlantic League. The 6’5” backstop made his Major League debut with the Toronto Blue Jays on May 9, 2017. He appeared in seven games with the Blue Jays that season, going 3-for-13 from the plate with an RBI and one run scored. His first hit and RBI both came off Atlanta Braves starting pitcher Bartolo Colon on May 15, 2017.
The Bradenton, Florida native has spent the majority of his time over the last three seasons at the Triple-A level; each with a different organization. Ohlman combined to hit .287 with seven home runs and 44 RBI over 78 games between Double-A Springfield and Triple-A Memphis in the St. Louis Cardinals’ organization in 2016.
The following year, sandwiched around a call-up to Toronto, he slugged 12 home runs with 38 RBI over 90 games for Triple-A Buffalo. Ohlman most recently hit 10 home runs with 28 RBI in 69 games with Triple-A Pawtucket (Boston Red Sox) in 2018.
Ohlman was selected in the 11th round of the 2009 MLB draft out of Lakewood Ranch High School (Bradenton, Florida) by the Baltimore Orioles. He spent the first six years of his professional career as an Orioles farmhand, including an impressive 2013 with High-A Frederick in which he set career-highs with a .313 batting average, 13 home runs, .410 on-base percentage and .524 slugging percentage. Ohlman was named the 2013 Topps Player of the Year in the Carolina League for his efforts.
The 28 year-old has twice been named an MiLB.com Organizational All-Star (Baltimore, 2013 and St. Louis, 2015), Post-Season All-Star (Frederick, 2013 and Springfield, 2015) and Mid-Season All-Star (Delmarva, 2011 and Springfield, 2015).
Ohlman has hit .251 with 65 home runs and 385 RBI over his 10-year professional career.