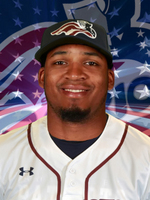 Biography:
Paredes enters his first season with the Somerset Patriots and second in the Atlantic League. He briefly appeared in 21 games with Lancaster last year, slashing .363 with three home runs and 14 RBI over 21 games.
The Dominican Republic countryman spent parts of 2011-2016 in the Major Leagues, split between five different teams. He broke into the “bigs” with the Houston Astros in 2011 after he was acquired in a trade with right-handed pitcher Mark Melancon from the New York Yankees for 1B/OF Lance Berkman. Paredes spent three seasons with the Astros before he split 2014 between the Kansas City Royals and Baltimore Orioles.
His best season in the Majors came in 2015 with the Orioles, where he hit .275 over 104 games with 10 home runs and 42 RBI. Paredes then played seven games with the Blue Jays to begin 2016 before finishing the season with 76 games in a Philadelphia Phillies uniform.
The switch-hitter hit .251 with 20 home runs, 100 RBI and 19 stolen bases over 332 games at the big league level.
Paredes was named a Mid-Season All-Star three separate times in his minor league baseball career (2009, 2011 and 2012). His best minor league season came as a part of that 2012 campaign where he hit .318 with 13 home runs, 59 RBI and 37 stolen bases over 124 games with Triple-A Oklahoma City.
The 30 year-old owns a .289 average with 54 home runs, 345 RBI and 190 stolen bases over 10 professional seasons in minor league baseball.