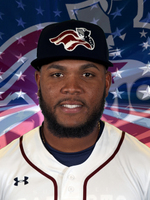 Biography:
Espinal enters his first season with the Somerset Patriots and first in the Atlantic League. The 25-year-old played 100 games with Triple-A Toledo (Detroit Tigers) last year, slashing .242 with six home runs and 24 RBI. He previously split his 2017 season between Double-A Altoona and Triple-A Indianapolis in the Pittsburgh Pirates organization, where he combined to hit .294 with a career-high 15 home runs and 86 RBI over 130 games between the two levels.
The Dominican Replublic native spent the first seven seasons of his professional career in the Pirates organization after starting as a 17-year-old in the Dominican Summer League. Espinal has earned a number of accolades throughout his career, including: 2017 MiLB.com Organization All-Star (Pirates), 2017 MiLB Gold Glove (Indianapolis), 2017 Eastern League Post-Season All-Star and 2016 & ‘17 Eastern Leauge Mid-Season All-Star.
Espinal has showed off a slick glove throughout his career, highlighted by an impressive 2017 campaign. The right-handed first baseman did not record a single error over 991 combined chances between Double-A Altoona and Triple-A Indianapolis that season, good for a perfect 1.000 fielding percentage. He owns a .995 career fielding percentage at first base, while also appearing in 37 games at third base.