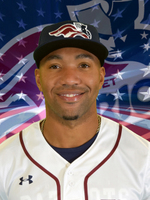 Biography:
Myers enters his first season with the Somerset Patriots and third in the Atlantic League. He previously played for the Southern Maryland Blue Crabs (2016) and the Bridgeport Bluefish (2017).
Myers enjoyed the best season of his professional career in Bridgeport. The speedy outfielder posted a career-best .337 average in 2017 to lead the league in hitting while adding four home runs, 43 RBI, 63 runs scored and a career-high 31 stolen bases over 96 games. He slashed .280 with seven home runs, 44 RBI and 29 stolen bases over 102 games with the Blue Crabs the year prior.
Overall, the 30-year-old brings a combined .308 average with 11 home runs, 87 RBI and 60 stolen bases to the Patriots over his previous 198 games in the Atlantic League.
Myers split the majority of his 2018 season in the Baltimore Orioles organization between Double-A Bowie and Triple-A Norfolk. He posted a .274 average with 14 RBI and eight stolen bases over his 55 combined games between the two levels.
The 6’3” outfielder was a fourth round pick by the Philadelphia Phillies in the 2006 MLB Amateur Draft. He began his minor league career as an 18-year-old out of high school, playing for Single-A Williamsport, later going on to spend seven seasons in the Phillies system.
Myers has also spent time in the Oakland Athletics and Los Angeles Angels organizations. He owns a .266 batting average with 23 home runs, 237 RBI and 131 stolen bases over his 11 seasons in the minors.