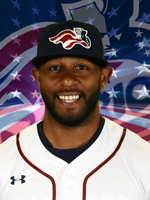 Biography:
Navarro enters his first season with the Somerset Patriots and second season in the Atlantic League.  He briefly played for the Sugar Land Skeeters in 2018 and hit .545 with two home runs before having his contract purchased by the New York Yankees.
Navarro has Major League service with the Baltimore Orioles, where he appeared in ten games during the 2015 season. For his MLB career, Navarro has a .276 batting average with five runs scored, eight hits, two doubles, a home run and three RBI.
The Caguas, Puerto Rico native’s baseball career began back in 2007 as a third-round pick of the Arizona Diamondbacks. He would complete three years of service with the organization before getting traded to the Kansas City Royals in 2010.
He spent the 2018 season at the Double-A level for the Seattle Mariners and Yankees organizations. In 2017, Navarro had a strong year at Triple-A Salt Lake, posting a .278 average with 137 hits, seven home runs and 82 RBI.
Navarro also has minor league service with the Cincinnati Reds and Los Angeles Angels. Over 1,224 minor league games, Navarro owns a .263 average with 72 home runs, 516 RBI and 88 stolen bases.