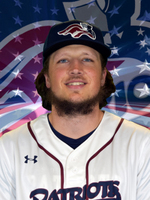 Biography:
Wenger was recently invited to spring training after impressing the team’s coaching staff at the open player tryouts held at TD Bank Ballpark on April 13th.
The former Delaware Valley University standout enters his first season with the Somerset Patriots and in the Atlantic League. In his four seasons with the Aggies, Wenger hit .448 and finished his collegiate career as the program’s all-time batting leader. He also set career marks in triples (16), finished third in stolen bases (63), fourth in doubles (37) and runs scored (127), tied for seventh in home runs (13), and eighth in RBI (101).
In 2015, Wenger was named the MAC Freedom Player of the Year for his .432 average (second on the team) and leading the Aggies in runs (36), triples (5), home runs (5), RBI (29), and stolen bases (22) after starting in all the team’s 36 games.