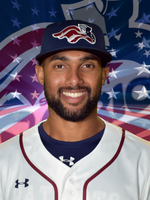 Biography:
Crouse enters his first season with the Somerset Patriots and third in the Atlantic League. Crouse began with the Lancaster Barnstormers in 2016, before a mid-season trade brought him to the New Britain Bees.  He would finish with a .287 batting average, 130 hits, 25 doubles, 10 homeruns and 67 RBI between the two teams. His 61 stolen bases was the most in the Atlantic League that year.
He returned to New Britain for an All-Star campaign in 2017, slashing .261 with 20 homeruns, 68 RBI and 40 stolen bases. He ranked third among qualifiers in the Atlantic League with the 40 stolen bases.
The 28-year-old spent the 2018 season in the Mexican League with Pericos De Puebla and in the Australian Baseball League with Canberra.
A 16th round pick in 2008 by the Toronto Blue Jays, Crouse spent the first seven seasons of his career with the organization. His best season with the Blue Jays came in 2011, where he mashed 14 homeruns and 55 RBI and 38 stolen bases.
His eight seasons in the minors have equated to a .247 average with 66 homeruns, 290 RBI and 151 stolen bases.