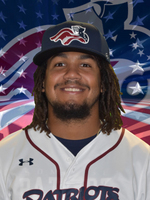 Biography:
Martinez enters his first season with the Somerset Patriots and second in the Atlantic League, spending the 2018 season with the Southern Maryland Blue Crabs. He began the 2019 season in the American Association, where he split time with Lincoln and Milwaukee.
Martinez started his career with the Texas Rangers organization, with six seasons of minor league service, while recording his best year in 2013. That season he would hit a career-high 15 homeruns, while driving in 47 runs and swiping 21 stolen bases.
He was named a mid-season All-Star with the DSL Rangers and Frisco Roughriders in 2009 and 2013, respectively. In addition, he earned post-season All-Star honors with the AZL Rangers in 2010.
Martinez went on to play for the New York Yankees in 2015, spending one season with the club. Prior to playing his first season in the Atlantic League, Martinez spent time in the Frontier League and Mexican League.
He excelled with the Blue Crabs last season, playing in 87 games for the team and slashing .285 with 33 RBI and 18 stolen bases.
Martinez has a lot of family connection to the game of baseball. His dad, Carlos Martinez, pitched for the White Sox, Indians, and Angels during the late 80’s and 90’s. His brother Jose, currently plays outfield for the St. Louis Cardinals.