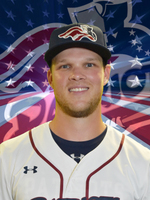 Biography:
Kinley enters his first season with the Somerset Patriots and the Atlantic League after five seasons of service in the Miami Marlins organization. He spent the early portion of the 2019 season with Double-A Jacksonville Jumbo Shrimp and Triple-A New Orleans Baby Cakes.
The 28th round pick of the 2015 MLB draft has been effective as a reliever with his time in Miami, playing in 167 games and owning a 3.67 ERA across 250 innings of work.
A product of Michigan State University, Kinley sprung onto the scene in 2015 with the Marlins, posting a 3.66 ERA in Single-A in his first season. He would continue to dominate, posting his most impressive season in 2017. That year, Kinley would be named a mid-season All-Star with the Jupiter Hammerheads, cruising to a 2-0 record, 1.30 ERA and six saves, good enough to get promoted to Double-A.
Over his five seasons in the minor leagues, Kinley has a 13-7 record, a 3.67 ERA and 234 strikeouts in 167 games.