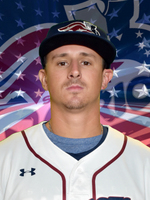 Biography:
Dodson enters his first season with the Somerset Patriots and the Atlantic League. The Castroville, Texas native spent the first seven seasons of his professional career in the Pittsburgh Pirates organization before going on to pitch the next three seasons in the American Association.
The southpaw made seven appearances for the Winnipeg Goldeyes (American Association) in 2018, while also spending time with Sultanes de Monterrey and Generales de Durango in the Mexican League.
His most notable year came in 2011, where he appeared in 13 games for Single-A West Virginia, claiming a 6-4 record along with a 2.57 ERA. Dodson also had service time for three seasons with Double-A Altoona (2013-'15).
Overall, the former fourth-round draft pick of the Pirates carries a 52-73 record, 4.40 ERA and 667 strikeouts in over 1,030 innings throughout his 10 seasons of professional baseball. He has started in 125 games and thrown for at least 100 innings six times in his career.