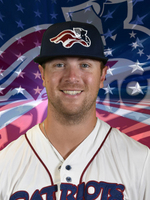 Biography:
Perakslis enters his second season with the Somerset Patriots and in the Atlantic League. The righty went 2-1 with a 3.35 ERA and 46 strikeouts over 45.2 innings of work across nine starts for the Patriots in 2018. He was brought in on July 24th and stayed with the team through the end of the year, including one postseason start in the Liberty Division Championship series.
The Abington, Massachussetts native played overseas in Italy for Unipol Sai Bologna to begin in 2019. His team won the European Champinship Cup 2019, in which he was named the Most Valuable Pitcher for tossing 10.0 scoreless innings across two appearances (one start).
Perakslis began 2018 with Double-A Arkansas in the Seattle Mariners organization, where he held a 3-1 record with 27 strikeouts over 41.2 innings across 28 relief appearances.
Prior to joining the Mariners organization, Perakslis spent the first five years of his professional career in the Chicago Cubs. The 21st round draft pick in 2012 made it up to Triple-A Iowa in both 2016 and 2017. That includes a combined 5-3 record with a 3.19 ERA and 77 strikeouts across 34 games between Double-A Tennessee and Triple-A Iowa in 2017.
Perakslis is 26-21 with a 3.82 ERA and 16 saves across all levels of baseball in his seven-year professional career.